We thank Marta for sending us this beautiful video of her bengal Atlas of Ramazan, here we see how he enjoys discovering the hidden charming places in the woods. He is son of Ferrari and Exótica

Passionata ("Pashy") of Ramazan. She just loves spending a long time exercising on her cat wheel, and as soon as you try to get her off it, she starts going faster... hehehe

Ares of Ramazan on a stroll down the beach (owner Manuela). Male 9 months old, son of Gabanna of Ramazan and Maseratti of Ramazan.

Female bengal 3 months old making friends with his dog friend just a few days after arriving at her new home in Marbella.

Bengal kitten playing with the water

Samsa of Ramazan (owner Paco of Málaga), daughter of Euphoria and Horatius.

Mau of Ramazan (owner Ana of Sitges), son of Lexxus and Olympia.

Lord of Ramazan with a german shepherd (owner Eva of Huesca)

3 users on-line
Featured
RAMAZAN ARES GLITTERSAND (Best of Best)
One of our bengals, property of Natalia, has won the title of Best of Best in the Exposition in Italy the 23 April of 2017 (read more)
(read more about the prizes and titles of our Ramazan bengal cats) 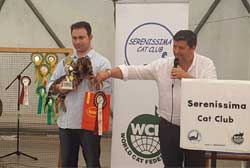 Reserve your appointment to visit us!
View the bengal kittens available 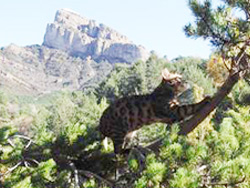